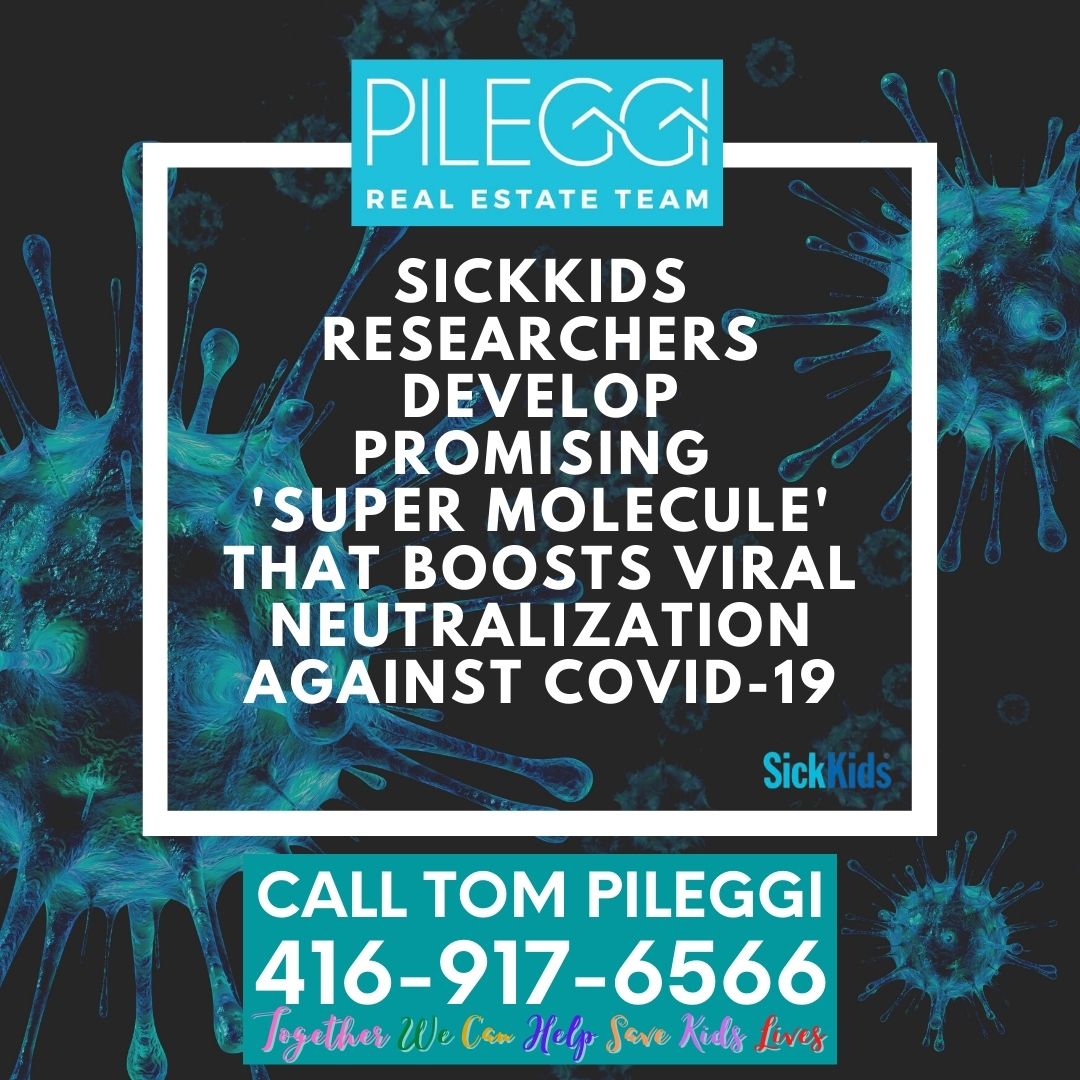 TORONTO - A research team led by The Hospital for Sick Children (SickKids) has developed a ‘super molecule’ that combines potent antibodies to neutralize SARS-CoV-2, the virus that causes COVID-19. The molecule was shown to have up to 10,000 times more potency compared to conventional antibodies and an ability to address virus variants, important tools in the fight against infectious diseases like COVID-19. This promising research is now being taken from the lab into pre-clinical development. The study was published in Nature Communications on June 16, 2021.

Since the onset of the pandemic, studies around the world have focused on using monoclonal antibodies – immune proteins typically originating from humans that can be produced at large scale in the lab – to target the spike protein of SARS-CoV-2. Led by Dr. Jean-Philippe Julien, the study team set out to understand whether a combination of multiple antibodies on a single molecule could boost viral neutralization, the process to stop a virus before it invades a host cell.

The researchers used human apoferritin, a protein found naturally in humans and which is biologically inactive, as a scaffold for the molecule. They tested several human-derived antibody sequences in the lab to see which combinations most effectively neutralized a broad range of SARS-CoV-2 variants. The result was a single molecule that targets three sites of vulnerability on the spike protein and increases the neutralization potency of parent antibodies by ~1,000 to 10,000-fold.

“To our knowledge, this is one of the most potent antibody molecules developed to date against SARS-CoV-2. We showed that we could use the power of multiple specificities stitched together on a single molecule to create broadly acting, ultrapotent neutralizers that are able to also address the virus as it mutates. This could radically reshape the way we approach treating mutating infectious diseases like COVID-19 in the future — before the next pandemic hits,” says Julien, a Senior Scientist in the Molecular Medicine program at SickKids.

The platform technology developed by Julien and Dr. Bebhinn Treanor, Associate Professor at the University of Toronto, emerged from years of research on other infectious diseases such as HIV, and was based on discoveries in the 1990s that showed how a highly mutating virus is significantly weakened when at least three critical sites of the virus are therapeutically targeted at once.

When the pandemic hit in 2020, Julien mobilized his lab, colleagues and infrastructure at SickKids to test the platform against COVID-19, screening a range of human-derived, SARS-CoV-2 specific antibodies, including some provided by Distributed Bio, now Charles River Laboratories, a research biotechnology partner.

“Broadly neutralizing antibodies are rare and difficult to find. We developed a platform that can rapidly leverage antibodies emerging from early discovery efforts into best-in-class therapeutics. With the ability to combine multiple antibodies, one molecule can then attack three sites of vulnerability and only needs a small amount – we’re talking picograms – to be effective. Essentially, we can combine the right antibodies to hit the right pressure points on the virus,” says Julien, who is also an Associate Professor in the Departments of Biochemistry and Immunology at University of Toronto, and a Canada Research Chair in Structural Immunology.

Why potency matters in the race to develop new therapies

While historically monoclonal antibodies have been used for immunotherapy against infectious diseases, development of such therapies can take years. In that time, a virus can mutate, meaning existing therapies and vaccines may not be as effective over time as new variants emerge. This study shows how higher potency molecules work better against viral mutations.

While SARS-CoV-2 has so far shown lower viral diversity when compared to a virus like HIV-1, meaning SARS-CoV-2 variants are not as significantly different from each other, the tri-specific and potent design of the MB platform is already built to handle future virus variants that may emerge.

“By using a technology with plug-and-play features that allow for the development of a rapid, highly potent and broadly-acting molecule, you can spend less time discovering therapies and reach more people faster, which as we’ve seen is extremely important during a pandemic and in preparing for future pandemics,” says Julien.

The next steps for the research are focusing on rapid pre-clinical development to demonstrate the therapeutic potential, supported by a Bill & Melinda Gates Foundation grant. This study was supported by the Ontario COVID-19 Research Fund, Natural Sciences and Engineering Research Council of Canada (NSERC), Canadian Institutes of Health Research, SickKids Foundation, Anke & Kirk Simpson, Christian & Jennifer Lassonde, and infrastructure supported by the Canada Foundation for Innovation and Ontario Research Fund.

About The Hospital for Sick Children (SickKids)

The Multabody (MULTi-specific, multi-Affinity antiBODY) platform used to develop the molecule is designed to simultaneously target multiple sites on a pathogen to effectively deliver antibodies. Through bioengineering, the team was able to load and deliver more antibodies at one time on the molecule.

The Toronto MLS® requires registration to view all homes currently for sale.
(Prices and inventory current as of February 5, 2023)

Verify the value of your home,
maximize your investment and see local market activity.